Losing Weight VS Losing Body Fat (DON’T GET THIS WRONG)

People use the terms of losing weight and losing body fat interchangeably, which is WRONG. That’s why you can’t tell how fit you are, even if the scale is showing you satisfying results. So, what’s the difference between the two terms, and what should you do?

Some people are getting disappointed in their fitness journey because they don’t see pounds coming off of the weighing scale. They think that body transformation requires losing weight, which is very similar to the case of one guy that I had spoken with last time. He already lost 60 lbs, yet he’s not happy with the way he looks, and you don’t want that to happen to you.

The discouragement stems from wrong thinking between the two terms, and we’re going to demystify the terms today.

Weight loss is just the beginning of your body transformation journey. During this process, you’re losing water weight (composed of 10-25% of total body weight), body fat (10-30%), and muscle mass (30-55%) as well.

Losing body fat is maintaining or gaining muscle mass while trying to drop the body fat percentage, and this is where you need to focus on when trying to have a good physique. You don’t necessarily need to see a change in the scale in this process.

QUESTION: IS IT POSSIBLE TO HAVE A GOOD BODY TRANSFORMATION WITHOUT CHANGING BODY WEIGHT?

Absolutely! In fact, I have a client before who didn’t look good because of the body fat despite being in the normal weight. But now, he managed to stay on the same weight while having a more beautiful appearance after stripping off the excess fat on his body.

So, if you’re going to compare two people with the exact body built, they could have a different bodyweight because the first person might be an athlete (which means he has a significant muscle mass). The second person is just a slim guy who doesn’t work out or lifting weights. The former can weigh more than the latter.

THEN, WHAT SHOULD YOU DO?

If you have bodyweight to lose, focus first on losing weight program. After this, you can now focus on losing body fat and start to gain muscle mass to have a good physique.

Share
Do you need help with your fitness goals?
Hey, I'm Xenios Charalambous. I'm determined to help you transform your body. Watch the free training and get your sustainable fitness guide!
GET FREE TRAINING +
SUSTAINABLE FITNESS GUIDE! 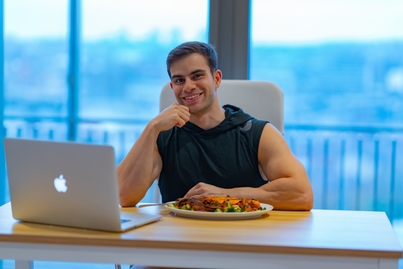 About Xenios
He started teaching fitness on 2013 via youtube videos, and he is mostly known from his viral video “Game Addict To Fitness Model” which reached over 6.6 Million Views. He coached A-List celebrities while he was in London, partnered with X-Factor, Google, Morgan Stanley and Amazon to train their executives and he has been through 2 years training in the special forces. Most importantly, he specialises on designing sustainable fitness solutions for busy individuals.
Learn More
Do you need help with your fitness goals?
Hey, I'm Xenios Charalambous. I'm determined to help you transform your body. Watch the free training and get your sustainable fitness guide!
GET FREE TRAINING +
SUSTAINABLE FITNESS GUIDE!